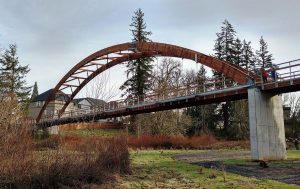 This morning I went venturing to Orenco’s newest park to check out Patrick Dougherty’s stick work project. Dougherty is a North Carolina Native who not only has his M.A. in Hospital and Health Administration, but also studied art history and sculpture as well. Over the past 30 years, Dougherty has created over 250 sculptures using saplings and twigs as construction material. He is internationally acclaimed, his work being seen not only over all of the US, but also from Scotland, to Japan, to Brussels. This isn’t Dougherty’s first visit to Oregon. 2011 brought him to Oregon State University to create a sculpture entitled Pomp and Circumstance, and in 2014 he sculpted Big Master Twister for the Portland Children’s museum. 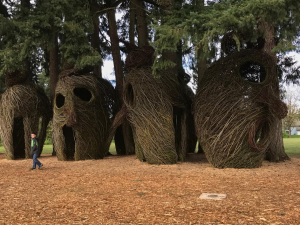 The sculptures in the Orenco Woods Nature Park truly are breath taking. There are so many beautiful aspects about them. Though Dougherty came up with his initial concept during his visit to the park in June 2016,  it wasn’t until this past month that it was finalized, after meeting with the local Orenco community and completing construction with over 100 local volunteers. The sculptures are crafted out of willow branches, which lend a gorgeous curvature to the abstract faces. All of the woven faces are integrated between the trees and hollow, creating an interactive experience for the public. It is this coming together of art, history, and community which truly makes this project special. Volunteers had taken time to fill Dougherty in about Orenco’s long history.

For those of you not familiar with the history of Orenco, its roots go all the way back to 1886. Squire Ebberts and his Native American wife  first homesteaded the area, which eventually became the Bennett donation land claim. After a group of Chinese men were hired to clear several of the wooded acres, the land was used as a pasture and a wheat field until it was scouted out for other use.

At the time, the Oregon Nursery Company was operating out of Salem, and was run by two Canadian Scots, Malcolm McDonald and Archibald McGill. They purchased the 1200 acres of land that would later become Orenco (name derived from the the combined letters of the nursery). On the land a wooden building that covered two acres was built, the largest of its kind in the US at the time. It was originally used as a packing shed, but also housed the Washington County Fairgrounds for awhile due to its size. In 1905 the nursery’s Salem plant was destroyed by fire, and the entire company moved to the Orenco location. 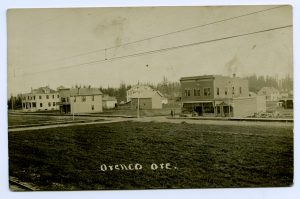 Orenco was a company town that provided services to the company’s workers and their families. Many of the workers for the the Oregon Nursery Company were Hungarian immigrants. Much of the housing that served this community was originally located on what is now Quatama Road.  The town was platted in 1908, but was not incorporated until 1913. The same year the town was platted, the Oregon Electric Railway finished its route that ran from Portland to Forest Grove, creating a stop in Orenco. According to railway records, the Orenco station averaged 1,000 passengers a month. Pretty impressive for a small town! The town grew to be the home of 500 people. It became large enough to have a city hall, fire house, a school with 169 children enrolled, a blacksmith shop, ice cream parlor, hardware store and lumber yard, two grocery stores, one church ( the Orenco Presbyterian Church), and even a printing press. It even boasted the “modern conveniences” of water, sewer, and electric lighting, things we sometimes take for granted today. Some of the old buildings still remain, and can be seen when you drive through old Orenco. When you walk in the nature park, you can see the McDonald house, constructed in 1910 by the Oregon Nursery Company’s president, Malcolm McDonald. The house is now listed as a historic place.Unfortunately the little town of Orenco was effected by the Great Depression. The nursery, plagued with financial troubles and mismanagement, closed down just before the Great Depression fully hit. After the nursery closed, a subsidiary of companies emerged from it, some that still exist today, such as A. McGill and Sons, Motz and Son, Pacific Coast Nursery, and Rich and Sons. Unfortunately, it wasn’t enough to save the town. With the closing of the Oregon Nursery, the town was only able to hang on until 1938, when the remaining citizens dissolved the city government. After the urbanization of the post WWII era, Orenco remained a planned community with cul de sacs and single family homes now spread across the former nursery’s lands. It became absorbed by Hillsboro, choosing to remain unincorporated. When Trimet expanded Lightrail to Orenco in 1998, the community was back on the railway again.

Today, you can drive through Orenco and see so many different homes, from the towering apartment communities and condos that reside over businesses in Orenco Station, to single family homes, and town homes. I still love driving through Old Orenco, where you can still see some of that history present. If you want to experience a piece of the past, definitely stop by the new Orenco Woods Nature Park and imagine what the land was like as a nursery.